PepsiCo products are enjoyed by consumers more than one billion times a day in more than 200 countries and territories around the world. PepsiCo generated more than $70 billion in net revenue in 2020.

In the early 2010s, Pepsi needed to expand access to legacy freight broker software. This meant adding mobile access — without discontinuing use of the legacy software or limiting functionality for mobile users. Blue Stingray provided a solution. 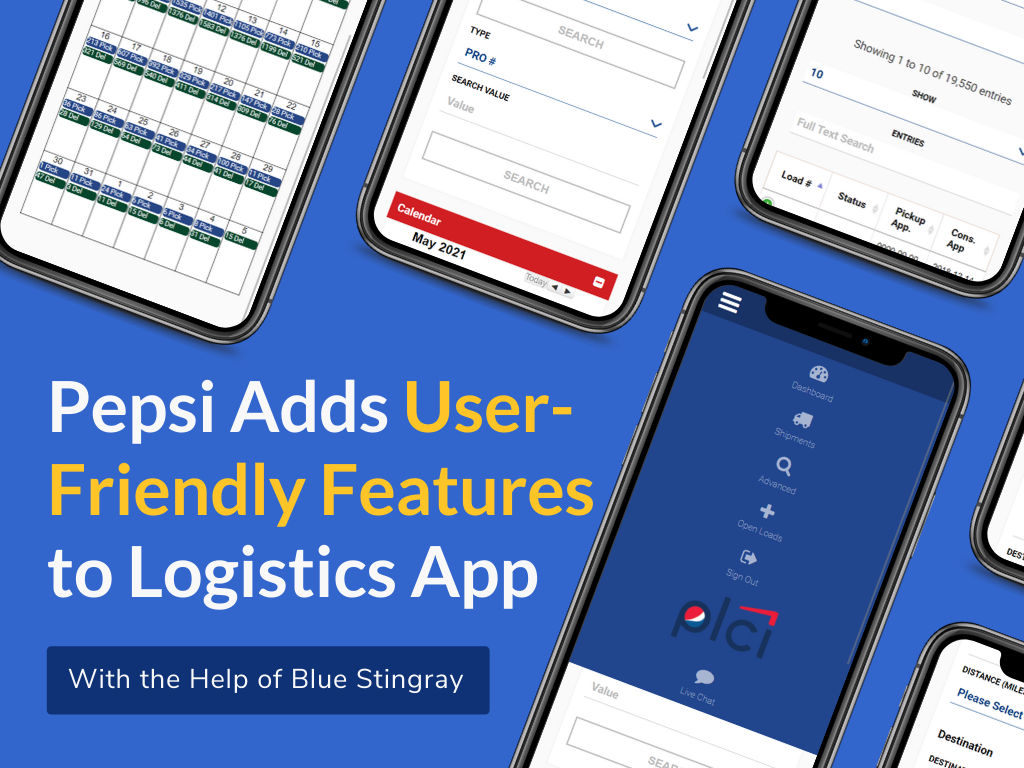 PepsiCo utilized freight broker software to manage and track shipments. While the software was effective, it had significant limitations that became problematic during the cloud computing & mobile revolution of the early 2010s. The desktop tool had no mobile interface and no web interface — in other words, it wasn’t user friendly by modern standards. Moving to a new software tool was infeasible, given the extent of the data collected under the legacy system.

Under the legacy tool, realtime shipping updates were limited to people who could access the software through a dedicated desktop computer. People using the tool needed significant training to use it effectively. Carriers would need to call into an office to get shipping updates, which created substantial efficiency issues.

The goal of the project was to provide customers, employees, and carriers with intuitive access to the system. Users would be able to view and update shipments in real time, and as long as they had appropriate credentials, they could navigate information easily. By providing this type of access, PepsiCo could cement their position as a technology leader and realize immediate benefits through improved communication and efficiency.

After evaluating options, PepsiCo contacted Blue Stingray. Our task was to create a new application that could connect with the freight broker software and function as a user-friendly front-end tool.

The Plan: Blue Stingray would build a mobile tool that allows access to the freight management database.

The primary goal of the project was to give users mobile access to the freight management database. The project began near the start of the mobile revolution — business-specific smartphone and tablet apps were still uncommon, and our team had to address a variety of technical issues to create a seamless connection between the Laravel app and the freight management database.

One significant issue: The freight management software had limited API functionality, which prevented access to certain data. Our team would need to find a creative way to provide realtime updates, utilizing the API access where possible, but circumventing the limitations of the API without compromising security or stability.

We decided to fill in the gaps in the API access by using FTP; by transferring files directly, we could mimic natural integration with the software’s Access database. This method would require appropriate error-handling safeguards and testing to prevent potential data loss and security issues.

By using a combination of file transfers and API scopes, Blue Stingray could provide users with desktop-equivalent access. However, this presented another problem, as the loads were associated with large amounts of data — at varying degrees of importance. To make the app as functional as possible in a mobile view (and to prevent the need for extensive menu diving) the Blue Stingray team worked with PepsiCo to determine the exact information that needed to be readily available.

The Solution: A Laravel interface that provides a mobile-friendly interpretation of legacy software.

Blue Stingray recognized the need for a fast turnaround. Working under a 6-month prospective timeline, the team began identifying API limitations and working with PepsiCo to create workarounds that would not limit essential functions while providing an intuitive user experience.

At the time, industry-specific mobile web apps were entering their first phase of wide adoption. The app would need to function on iOS devices (iPads and iPhones), which were commonly used; Blue Stingray’s team also took steps to ensure that the app would be responsive and compatible with future platforms.

Blue Stingray was able to create a functional logistics management app within 6 months. PepsiCo processed thousands of shipments through the app, which offers direct access to representatives, live map views of carrier routes, and other functionality that wasn’t possible through the legacy application.

Laravel is a relatively new, constantly evolving framework, and the javascript tools that go along with Laravel are similarly complex. Blue Stingray’s team has updated the original implementation several times.

When using the legacy desktop software, Pepsi’s users faced technical challenges when completing everyday tasks, and the software’s limitations prevented mobile access. The responsive web app allows near-full access to the original application’s functionality — with new features (including live shipment tracking) that were not possible through the legacy system.

The new app has improved efficiency and communication for Pepsi’s logistics team. Even so, the company was able to avoid the significant costs associated with a major platform change; by designing the new app around the time-tested legacy system, Blue Stingray was able to offer a modern upgrade without the associated costs of implementation — PepsiCo didn’t have to provide extensive training on a new system or build a completely new logistics framework from the ground up.

“Blue Stingray has been a huge help fixing issues, making customizations to the site, improving site performance, making recommendations to help us get to the next level — you name it! They have become a reliable part of the team.”

— Adrian Southern, Director, Innova Disc Golf
Have a project? Get In Touch
Schedule A Demo › Contact Us ›